‘Are you at Harrogate this year?’ A question I have fielded innumerable times over the past four years since the publication of my first book at the back end of 2015. Sometimes the question is poised coyly, sometimes aggressively, sometimes with an air of knowing camaraderie – we crime writers, after all, tend to flock together, schlepping miles to the same spots at various times of the year, as hardy and diligent in our migrations as Emperor penguins marching to their winter nesting sites. During those four busy years I have spoken at or attended some of the biggest crime and literary festivals in the world. I even ended up in Dubai last year, on panels (and on camels – don’t ask!) with national treasure Alan Titchmarsh, CWA Chair Martin Edwards, and Bones creator Kathy Reichs.

But, until this year, I had somehow missed out on the biggest and brightest fixture of them all, the Theakston Old Peculier Crime Writing Festival at Harrogate. Various unfortunate date clashes and injuries (cricket is a more dangerous sport than people realise) had kept me away. But this year, finally, I had a clear weekend, with all body parts relatively intact. I booked my train, purchased my Rover tickets, packed my bag, and set off for the north.

There was a particular reason for attending this year. Theakston, via their programming chair, the inimitable Lee Child, had managed to convince that doyen of the legal thriller, John Grisham, to board a plane and head over to our green and pleasant land. The double delights of a trip to a small town in Yorkshire – and a pint of its famous Theakston Old Peculier bitter (did you know that each bottle of Old Peculier features a ten-word crime story written by a renowned crime author?) – proved irresistible for ‘America’s favourite storyteller’. And for me, the lure of seeing up close, one of the true giants of crime fiction was similarly impossible to resist. Twenty-five years ago, I purchased a copy of The Firm, my first real foray into crime fiction. I still have that copy, ragged around the edges in spite of the plastic covering I’d shoved on it, and took it along in the hope of obtaining Grisham’s scrawl.

The train ride up from London on the Friday morning was straightforward – I even got some work done on my next book, in between watching a grown man drool onto his chin as he dozed above his newspaper. I checked in at my hotel, then headed off to the festival on a balmy summer’s day, a spring in my step.

The first thing you notice at Theakston is the crowds. Not since the decade I lived in Mumbai, a riotous city of twenty million, had I seen such a concentrated mass of humanity – though, to be fair, the Old Swan appeared to have fewer lepers, beggars, eunuchs and elephants on display. People, people everywhere, and every one of them a crime author, reader, blogger, reviewer, or general enthusiast. It was like settling into a steaming jacuzzi of like-minded souls. Don’t be shy, is the rule here. If you see someone you’ve always wanted to talk to – go ahead and approach them. Writers, whether they be on a panel or not, love chatting, especially about books, ours or anyone else’s, for that matter. We are lovers of crime fiction first and foremost, authors second. Don’t believe all that guff about tortured, prima donna artists. On the whole, we authors are salt-of-the-earth types, always up for a chat. (Until we encounter our latest half-baked Amazon review: “I didn’t actually read your crime novel but my Aunt Violet said it wasn’t as good as Winnie the Pooh so I’m giving you one star”,and then we transform into Jack Nicholson in The Shining). And we crave validation. There is no better feeling than someone approaching us at a place like Theakston and saying, simply: we love your books. I’ve seen grown authors weep and fall to their knees at such moments, the twenty-year-long struggle, the late nights, the divorces, the bankruptcy, the multiple smashed laptops, the cosmic soul-search for meaning, all finally rendered worthwhile.

Theakston, taking place in the same hotel that Agatha Christie turned up at after her infamous disappearing act, is organised without parallel sessions – which means it is one session at a time, and those sessions are always full. High quality authors, famous chairs, and knowledgeable audiences – these are the hallmarks of this wonderful festival. There’s a lot crammed into the four days. The announcement of the Theakston Crime 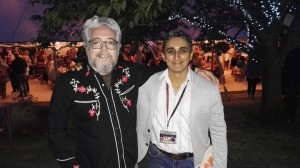 Book of the Year – which this year went to fellow connoisseur of the written word, Stav Sherez, for his excellent novel The Intrusions, described by no less than Ian Rankin as a ‘Silence of the Lambs for the Internet Age’ (Stav also won “Fanciest Rodeo Shirt Ever Worn By A Major Crime Award Winner); a terrific new blood panel by ‘Queen of Crime’ Val McDermid introducing the likes of British ‘Scandi’ author Will Dean and his deaf protagonist Tuva Moodyson. There’s a murder mystery dinner – with well-known authors seated at your table, a quiz night hosted by crime legends Mark Billingham and Val McDermid, and a big headline grabber of a main event. This year there were two, in fact – the aforementioned Grisham, and fellow American, Don Winslow – writer of dark, muscular, fact-based novels such as his Cartel series.

The town itself is relatively small, picturesque and hilly, and well worth a little mooch around. On the Friday I ended up at lunch with good friends and fellow authors Abir Mukherjee, Imran Mahmood and Leye Adenle. We drifted into a tiny new Thai place. It 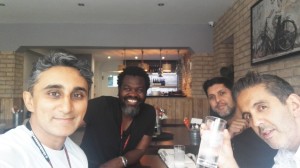 was deserted, but the welcome was effusive. The enthusiastic lady proprietor told us they had just opened and were much in need of our coin. So much so that she actually locked us in … but that’s a story for another day. My point being that Theakston is also a great place to meet up with fellow authors, exchange notes, and offer each other a supportive pat on the back.

I enjoyed all the sessions I attended, watching old friends speak, and new authors I had not heard of. I bought books. A lot of books. You must resign yourself to this. Whatever resolutions you make about not adding to your TBR pile will vanish at Theakston. On Friday evening I listened, awestruck, to the reminiscences of John Grisham as he recalled his incredible career in a riveting back and forth with Lee Child. 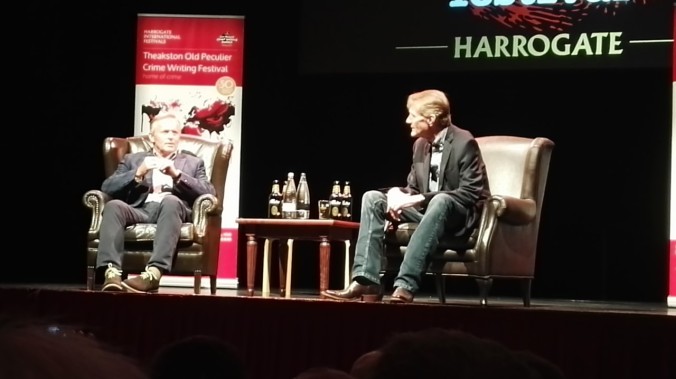 After the event, I headed off to dinner with a stable of fellow Hodder authors. I ended up next to fellow cricket lover and crime reviewer Jon Coates of the Sunday Express, discussing England’s chances of beating India this summer (fifty-fifty, we agreed, though there was only a twenty percent chance of us actually being right), and an author I had long been a fan of but seemed to keep missing at events – Yrsa 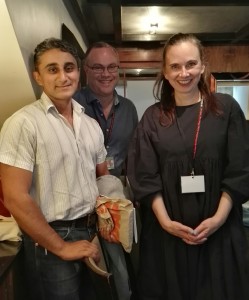 Sigurðardóttir, the‘Queen of Icelandic Crime’. Yrsa managed to unscramble my garbled murdering of her name so that I can now, with complete confidence, mispronounce it in at least ten different ways. We turned out to have a lot in common. She is from Iceland, and I recently played the national cricket team of Iceland in a game of cricket (yes, they do have a team, and, no, they didn’t win).

Theakston is both a celebration of crime fiction and a giant love-in of those who are passionate about the genre. It hosts the friendliest bunch of people around, is brilliantly organised, and is as inclusive as anywhere. The winds of diversity are being felt throughout the arts and Theakston has responded by ensuring that their speaker programming reflects this – I was delighted, for instance, to see A.A Dhand talking passionately about the Bradford of his youth. For four days, this little corner of Yorkshire is the most egalitarian place on earth. It’s also great value for money. For an £89 Rover day ticket you get lunch, coffees, a goodie bag full of books, attendance at all the sessions on that day, and most importantly, the opportunity to bump into, chat, take selfies with, and wrangle autographs out of dozens and dozens of the best crime authors around. How can you put a price on that? Hats off to the Theakston team.

It’s been a wonderful weekend, and I can’t wait for next year to roll around.

Join my newsletter for exclusive   content, competitions, and more.